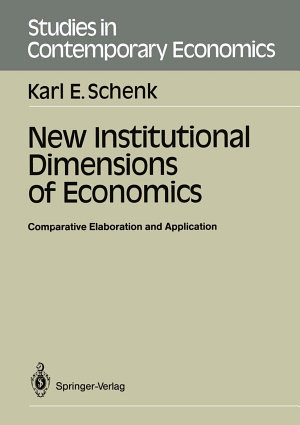 Among economists the recognition of the importance of social and eco 1 nomic institutions has grown during the last ten years. Even be fore the more recent period, however, this trend of thought was 2 clearly noticeable. The origin and formation of institutions was one of the issues which, according to C. MENGER, should playa central 3 role in economics. Nevertheless, this tradition is not reflected in mainstream eco nomics. L. HURWICZ characterizes this failure by observing that "tra ditionally, economic analysis treats the economic system as one of the givens" (1973, p. 1). In this case "system" may be understood in a narrower or in a wider sense comprising only contracts (on markets) or a larger variety of procedures for the co-ordination of economic activities as, for instance, managerial hierarchies. In view of the prominent role of price theory in mainstream economics one would guess that-the system is perceived to comprise mainly contracts as co-ordinating procedures: prices form a constituent part of contracts on markets but not of other co-ordination procedures. This indicates an understanding in the narrow sense. There is an additional and even more convincing argument in favour of our contention that mainstream economics is based on this narrow interpretation of the economic system: It evaluates alternative situations by reference to the allocation of the factors of production, i. e. by comparing outcomes of the economic process. Doing so is only logical if the economic system is understood as a system of contracting on markets.