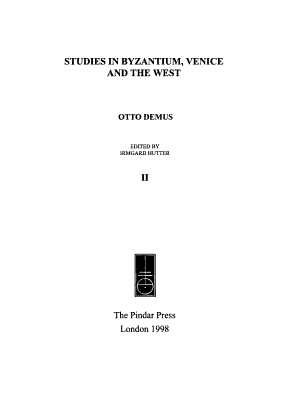 Professor Otto Demus's work on Byzantine art represents one of the great original contributions to the subject made in this century. His early studies in the 1930s on the "mosaics of Greece were followed by his fundamental work on the mosaics of Norman Sicily after the Second World War, and the later great studies of the decoration of San Marco in Venice, which remained throughout his abiding concern. These two volumes make available the papers Otto Demus published in a variety of periodicals in the course of a long and highly productive working lifetime. They have been edited and revised by Dr. Irmgard Hutter, a pupil and friend of the author. Volume I includes Demus's papers on Byzantine art in general, including his outstanding "contribution to the study of the development of Palaeologan art. His interest in the working methods of the artists is also evident. The volume includes most of his papers on Byzantine mosaics, mural painting, icons, enamels and manuscript illumination. Volume II deals with the author's lifelong interest, the mosaics of the church of San Marco in Venice. The papers reproduced here cover the history and decoration of this great monument, including the sculpture. The influence of the San Marco mosaics and Byzantine art on the art of western Europe is also covered.